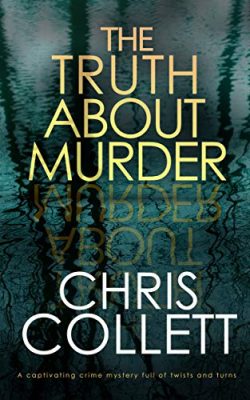 A Mugging. A Missing Woman. Then a Murder

Stefan Greaves wakes up from a coma. He was brutally mugged while investigating a complaint about a local hospital.

The woman who visited the law firm where Greaves worked had feared something very sinister was going on in the hospital’s postnatal ward. Now she has disappeared.

Rookie policeman, Mick Fraser interviews Greaves. Fraser’s new partner Denny Sutton is a cynical man with secrets of his own. Together Fraser and Greaves try to track down the missing woman.

Then a body is found on the riverbank and a fiendishly complex puzzle emerges. How are these crimes linked and what’s really going on in the police station? Can Fraser and Greaves put the pieces together?

“…another cracking book by Chris [Collett], absolutely brilliantly written.”
handbaglover
“I really enjoyed this book and it kept me guessing to the end.”
JW
“A good read with a remarkably different storyline. The characters are well developed and I hope will make more appearances.”
M Jay
“A great read. Very absorbing, I was hooked from the start. A fast-moving story, with twists and turns that builds to a thrilling climax. I couldn’t put it down.”
Beeba
“Great read, found it almost impossible to put down until getting to the end to discover the outcome.”
Thomas Barnes
“Loved it. What else is there to say. Believable characters. Great storyline. Edge of the seat conclusion. More please. ASAP.”
Lesley66
“A cleverly thought out plot, wonderful characters and a highly enjoyable read.”
misfit farm
Kerry M
Christine Rushton, Amazon 5* review
Previous
Next
"Well written, thoughtful, and entertaining, this one’s a good pick for those who like procedurals with some meat on their bones."
Booklist
"Fully-fledged female characters distinguish Collett’s eighth police procedural featuring Det. Insp. Tom Mariner."
Publishers Weekly
"I always look forward to the next gripping instalment in this Birmingham based detective series and this was another page turner."
www.letterpressproject.co.uk
"Great latest instalment from this series that keeps you guessing til the last minute and for once a twist you don’t see coming."
VL, Amazon 5* review
"The author manages to capture you, pull you into the investigation and keeps you guessing right till the end that you would never in your wildest dreams have imagined. A must read!"
Breakaway Reviewers, Amazon 5* review.
"A really good story with lots of twists and turns. Never guessed the culprit. Fans of detective stories should like this."
M K Ward, Amazon 5* review
"Kept me gripped from the very first page."
78th stitch, Amazon 5* review
“Absolutely chilling.”
Kerry M
Previous
Next

Images inspired by the plot

Previous
Next
This book on Goodreads

The Truth About Murder