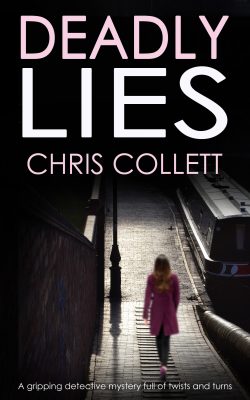 Journalist Eddie Barham is found dead in his home. A syringe is in his arm and a note by his side reads, ‘No More.’ An open and shut case of suicide? Not for DI Mariner. Hours before, he saw Barham picking up a woman in a bar. And then Mariner discovers Barham’s younger brother, Jamie, hiding in a cupboard under the stairs. Jamie is the only witness to his brother’s death, but his severe autism makes communication almost impossible. Mariner is determined to connect with Jamie and get to the truth. Is the journalist’s death related to his investigation of a local crime kingpin? What other dark secrets does Jamie hold the key to and can Mariner keep his relationship professional with Barham’s attractive sister, Anna? In a nail-biting conclusion, Mariner races against time to prevent more lives being lost.

This is a revised edition of  Mariner#1 ‘Worm in the Bud’.

"A really good story told well, and at times edge of seat material. A very interesting storyline,with good insight into what can be a very traumatic condition, as a grandmother to an autistic eight year old I feel this author portrayed the condition very sympathetically, as well as holding the readers interest with a cracker of a plot."
AnnabelleOn Amazon
"Convincing and highly readable."
The Guardian
"Occasionally a debut novel hits all the right buttons - and this one does, in spades. Sensational start to a crime-writing career."
Yorkshire Post
"A highly readable and challenging whodunit with a poignant comic thread."
Coventry Evening Telegraph
"A brilliant debut by a new author with a refreshingly different plot."
Shotsmag
"A well-paced crime novel with red herrings a-plenty to keep whodunnit fans guessing all the way to the end."
www.letterpressproject.co.uk
"Describing this as ‘a gripping detective mystery’ is absolutely spot on – I couldn’t put it down."
Roxy Starr, Blogger
"Chris Collett really knows how to reel you into a good story."
Mystery Thriller Week
Previous
Next

Previous
Next
This book on Goodreads