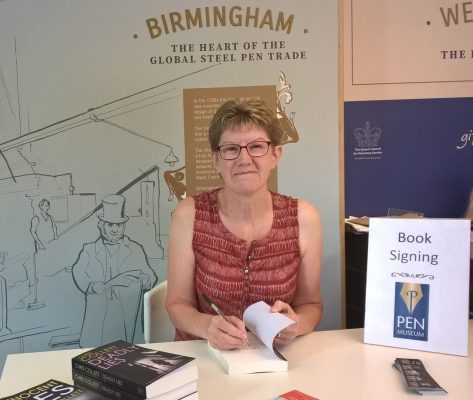 Thank you for visiting my website/author page, I hope you find something of interest here.

I’ve been writing with intent now for almost twenty years, but it began unexpectedly. I grew up secure in the belief that people like me didn’t write books. I’d never met an author, so the idea of becoming one didn’t cross my mind (not even alongside my other unlikely ambition to play tennis at Wimbledon), so I stuck to reading my favourite genre – crime fiction. Teaching was very much in the family, so that was my obvious career path. A degree in ‘Mental Handicap’ (we’d now call it Learning Disabilities), led to a variety of jobs with children and young people with a wide range of disabilities as a teacher, then advisory teacher and finally a university lecturer. It was in the midst of all this that the idea for as story came to me and wouldn’t let go. As is often the case, it was a ‘what if..’. In this instance: ‘what if the only witness to a serious crime was a person unable to communicate what he’s seen?’. Fitted in around the day job and family life, the book took around five years to write, and it became what is now the first in the DI Mariner series; Deadly Lies. Since then, seven other DI Mariner books have followed, along with my latest book ‘The Truth About Murder’ (Dec 2019), which introduces new protagonists Greaves and Plum.

The Crime Readers’ Association offers a unique perspective on the largest community of crime writers in the world: the Crime Writers’ Association. Established in 1953, the CWA is behind the prestigious Dagger Awards.

I’m a board member of The Letterpress Project is a not-for-profit initiative which believes that there is something very special about reading real, printed books. Visit their website to find out more including reviews, articles and exclusive author interviews.